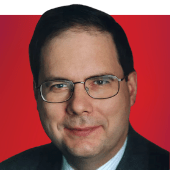 Jean-Michel Godeffroy is an independent consultant based in Paris, working mainly in Africa and in the Middle-East, helping central banks and banking organisations when setting-up payment systems, or advising central banks and securities regulators in overseeing market infrastructures. He is the chairman of the Central Bank Payments Conference and he participates in studies relating to new forms of money such as stablecoins and central bank digital currencies.
He retired from the European Central Bank in December 2014, after 16 years as director general in charge of payment systems and market infrastructures. In this capacity, he played a key role in the successful implementation of the TARGET1 and TARGET2 systems, the RTGS for the euro area, and of T2S, the integrated securities settlement system for Europe. He also contributed actively to the SEPA project, whose objective was to create uniform payments instruments in Europe. From 1998 until 2009, and again in 2014, he was a member of the G10/G20 Committee on Payments and Settlement Systems (now CPMI).
Jean-Michel started his career at Banque de France in 1982 where he was successively foreign exchange dealer, investment manager and banking supervisor. In 1989-1990, he was seconded to the Federal Reserve Bank of New-York.
Jean-Michel holds a degree for the Institut d’Etudes Politiques de Paris (SciencesPo) and an economics degree from University of Panthéon-Sorbonne.