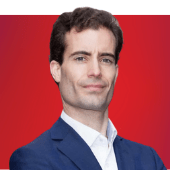 Gonçalo is a serial entrepreneur. He is the founder and CEO of Rnwl. Goncalo also founded and scaled the multi-award-winning Fintech company SyndicateRoom before stepping down as the CEO. Goncalo is also a guest lecturer in Entrepreneurship and Fintech at the University of Cambridge and a contributor for Forbes, writing regularly about entrepreneurship and Fintech. He regularly delivers keynote speeches at main conferences throughout the world. Goncalo regularly contributes or is featured in the media including BBC, Forbes, Financial Times and The Sunday Times amongst others.

Gonçalo was considered one of the Top 10 most influential people in tech in the UK as well as one of the Top 40 most influential people in fintech in Europe. Gonçalo is an alumnus of Imperial College London (awarded distinction) and has an MBA from Judge Business School, University of Cambridge where he was awarded awards for academic and professional achievements. Gonçalo is particularly passionate about giving entrepreneurs the chance to prove themselves and become successful. In his spare time Gonçalo cycles long distances, plays tennis and sails with his family whenever there is half a chance.