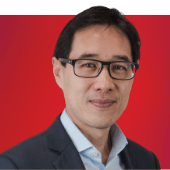 Co-founder of one of the fastest growing knowledge platform in Fintech and transformation. Venture Partner of Insurtech fund. Founding partner of the largest Fintech accelerator in Asia. Industry fellow at Imperial College. Previously MD at Citi, Associate fellow at Oxford.

My passion is in building and growing businesses - especially in changing environments. This led me from tech CEO in NY to Managing Director in London investment banks to Founding Partner of an accelerator in Hong Kong and now co-founder of a global knowledge platform in Fintech.

As CEO of The Disruptive Group, I am developing a firm that builds innovative finance businesses with a strong leverage on technology and advises CEOs of large organizations. One of TDG's projects is CFTE, which we co-founded with Tram Anh Nguyen. CFTE is a platform that helps the industry acquire this knowledge quickly, from Fintech to Artificial Intelligence to Open Banking.

Previoulsy, as Managing Director at Citi, I grew a business that helped Europe's largest insurance companies, the major pension funds and the international banks to adapt to an increasingly complex environment.

Before banking, I raised $15m as CEO of a Tech company, and developed it into a 50-strong company with offices in New York and Paris.

Huy is the co-founder of the CFTE. He is also the CEO of The Disruptive Group – a business builder and advisory firm in innovation and finance.

Prior to The Disruptive Group, Huy was a Managing Director at Citi, and previously at RBS and SG. Before banking, he was the CEO of Ukibi, a VC-funded startup in the US. He is a frequent keynote speaker in Europe and Asia, likes to teach and share with students and entrepreneurs, and is regularly quoted in articles on innovation and finance.

He writes the blog Disruptive Finance and is an Associate Fellow at Oxford Saïd Business School. He is also a member of ESMA’s Consultative Working Group for financial innovation and a founding member of the Asian SuperCharger - the largest Fintech accelerator in Asia. Huy is a graduate from MIT (US), École Polytechnique (France) and Ecole des Ponts et Chaussees (France). He is married and a happy father of 3 daughters.