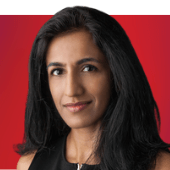 Dr. Ayesha Khanna is Co-Founder and CEO of ADDO AI, an artificial intelligence (AI) solutions firm and incubator. She has been a strategic advisor on artificial intelligence, smart cities and fintech to leading corporations and governments. Ayesha serves on the Board of Infocomm Media Development Authority (IMDA), the Singapore government's agency that develops and regulates its world-class technology sector to drive the country's digital economy and power its Smart Nation vision. Ayesha is also a member of the World Economic Forum's Global Future Councils, a community of international experts who provide thought leadership on the impact and governance of emerging technologies like artificial intelligence.

Ayesha serves on the Board of Sport Singapore, the lead government agency tasked with developing a holistic sports culture for the nation. Ayesha was also on the Ministry of Education, Singapore, steering committee that led to the development of SkillsFuture, the country's innovative program for preparing citizens for jobs in the fourth industrial revolution.